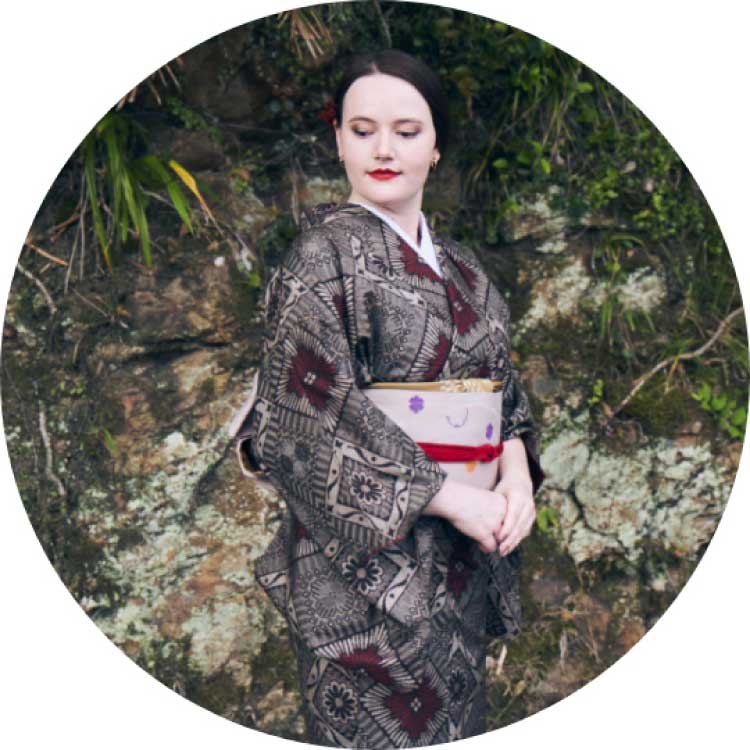 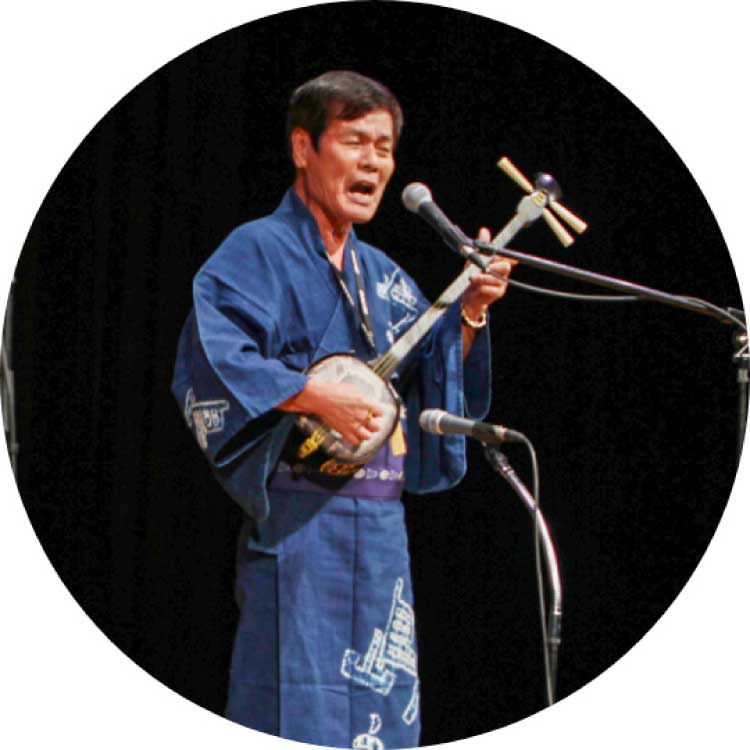 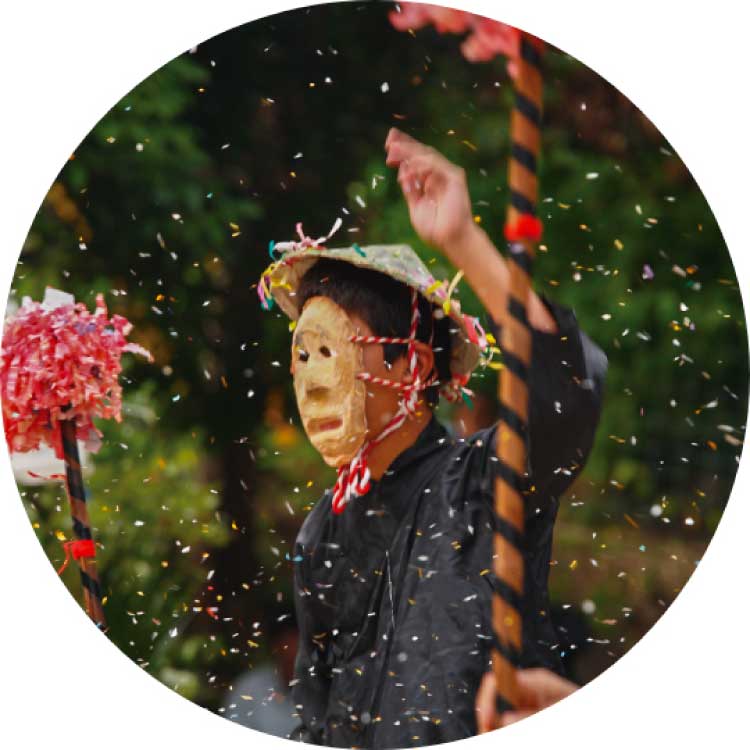 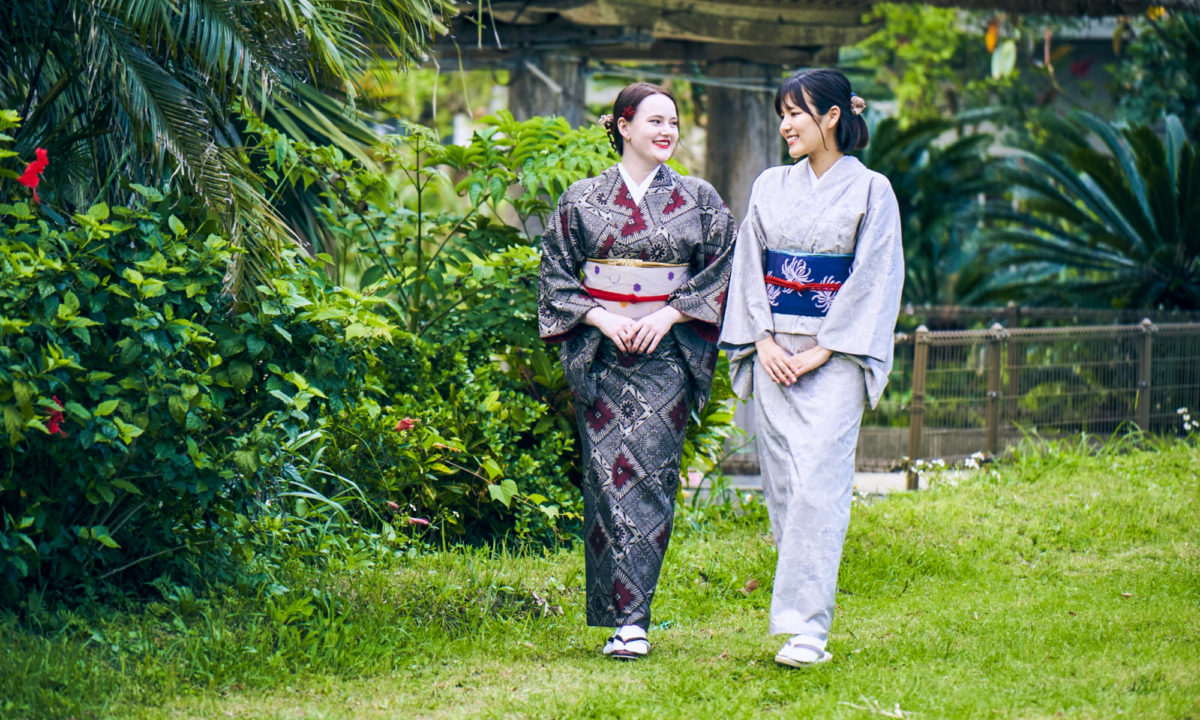 The exquisite art form of Oshima Tsumugi has been passed down through many generations, and has become a key aspect of life on Amami Oshima.

Tsumugi is one of the world’s great textiles. It is a labor-intensive, finely woven pongee–a soft, matte fabric made from threads of raw silk. The origins of the technique used to make tsumugi go back over 1,300 years, and the fabric is believed to have been first developed in India. Amami’s version of this fabric, known as Oshima tsumugi, is one of the most highly prized, and historically was used for elegantly designed, subtly dyed kimono. Traditionally, women would do the weaving at home, in between their chores, to contribute to the family income. By the latter half of the Edo period (1603–1867), Oshima tsumugi had become a specialty of Amami Oshima and, like sugarcane, islanders had to supply the fabric to the Satsuma domain as a kind of tax. This ended in 1879, when Amami Oshima became part of Japan. While production has decreased in recent years, many weavers still work at home. 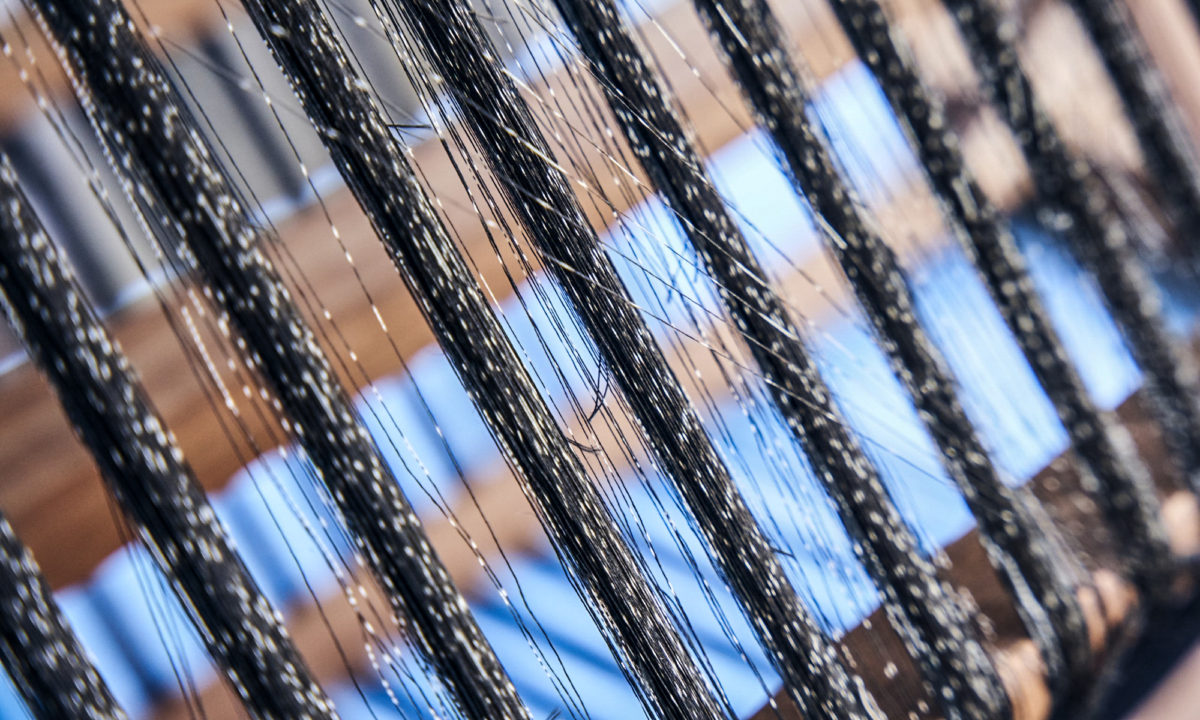 The process of making tsumugi is time-consuming and complex, with numerous, often repetitive steps. It starts with plotting a pattern that will guide how the 100 percent silk threads, both vertical and horizontal, are dyed before weaving. Many of the patterns are traditional designs that have been used for centuries, but there are also new versions created to suit modern tastes.

The threads are bound according to the pattern, and then dyed. One set consists of dyeing 20 to 80 times with a dye from the Yeddo hawthorn shrub (techigi in local dialect, and sharinbai in Japanese), and once with mud, traditionally from rice paddies. This is repeated three or four times. The combination of tannin from the Yeddo hawthorn and iron in the mud produces the traditional shade of black for which Oshima tsumugi is known. Indigo is used for blue shades. 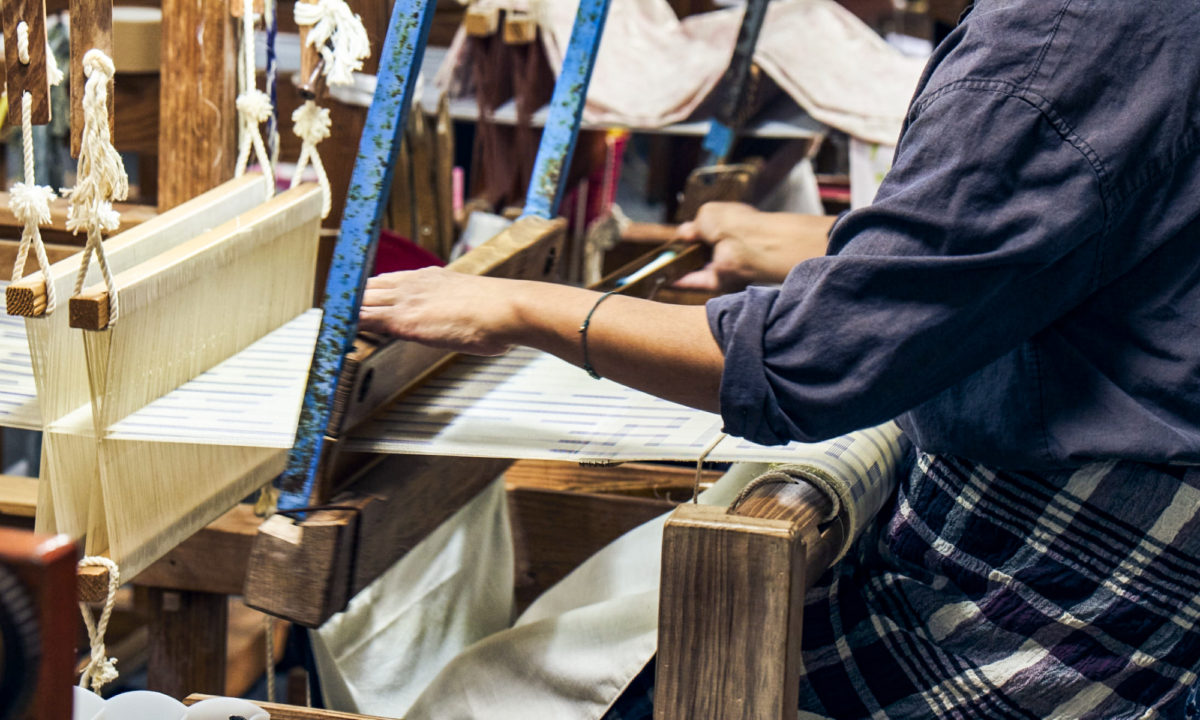 The threads are separated and prepared in a three-day process. When the bindings are removed, the dyed lengths of the threads and the white, undyed lengths form what will be the woven pattern. Then manual weaving begins, with the weavers carefully lining up the threads on the looms. This process requires intense concentration and skilled handiwork: one tan, the 13-meter-long roll of fabric needed to make one kimono, takes even the most experienced weaver 40 or 50 days to complete, at a rate of about 30 centimeters per day. 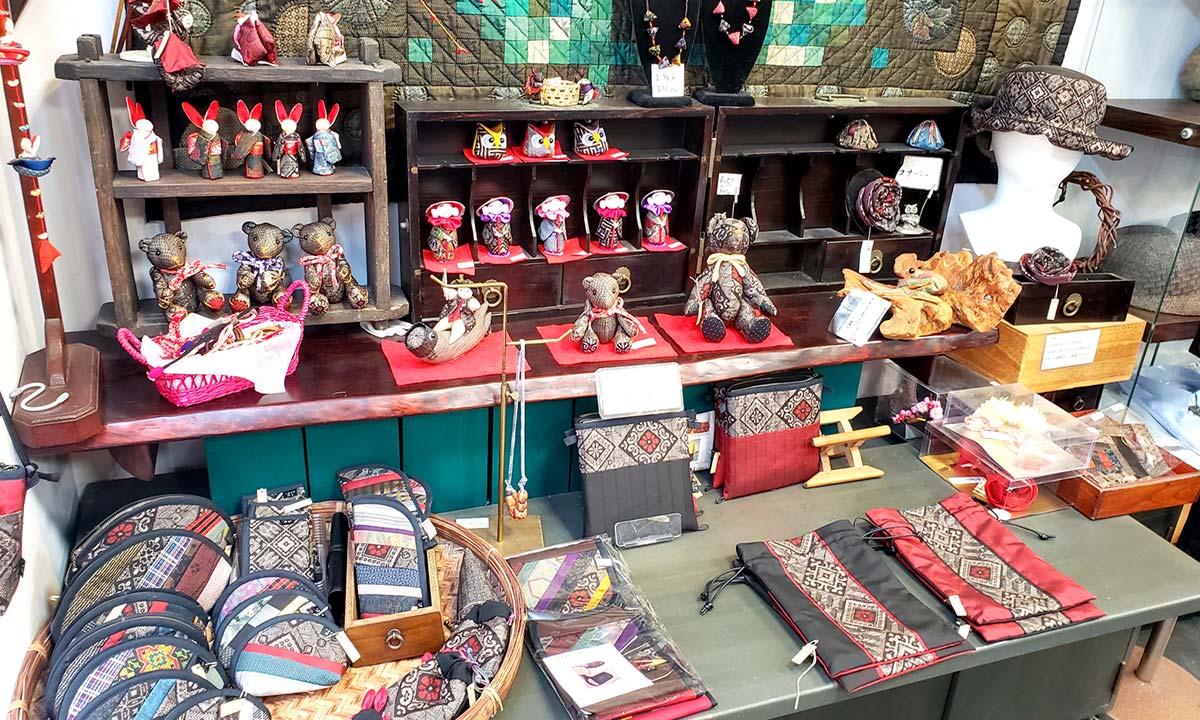 Every roll is inspected in detail before it receives the labels certifying that it meets strict levels of quality, was dyed in mud, and produced on the island. A label with an illustration of a globe certifies it is authentic Amami Oshima tsumugi, distinguishing it from Oshima tsumugi made in other parts of Kagoshima Prefecture. Oshima tsumugi is used not only in traditional kimono but also in products and souvenirs such as wallets, phone cases, coasters, card cases, face masks, men’s shirts and more. The price depends on the intricacy of the pattern and the skill of the weaver. Visitors can watch the process of producing Oshima tsumugi, and workshops in mud dyeing and simple weaving techniques are available. 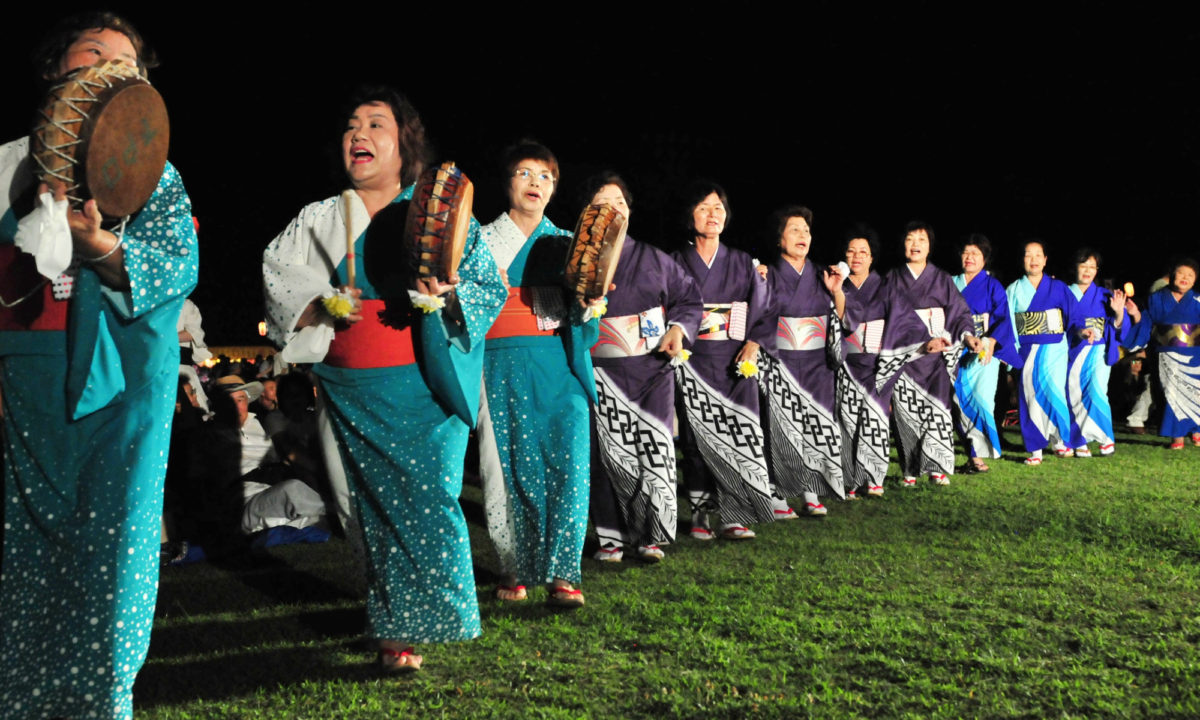 The people of Amami Oshima give the upmost importance to their connections with one another, and the folksongs of Amami perfectly capture this way of life.

Shima-uta is the traditional folk music of Amami Oshima. It is written with the characters for shima (island) and uta (song), but in the Amami dialect, shima also means a community, and many people refer to shima-uta as the music of their particular village. The songs are sung in the local dialect in a falsetto voice by a man or woman, and the singer is often answered by a backup singer. The singing is accompanied by a three-stringed instrument called the Amami sanshin, and is based on the Japanese musical scale. The body of the Amami version of the sanshin is the same as its Okinawan cousin. The Amami sanshin, however, uses thinner strings tuned to a higher pitch to match the vocal range of the singers, and is played with a bamboo pick rather than one made of buffalo horn. Some songs include rhythmic accompaniment by a small drum called chijin along with high-pitched whistling known as yubibue.

Origins and Development of the Songs 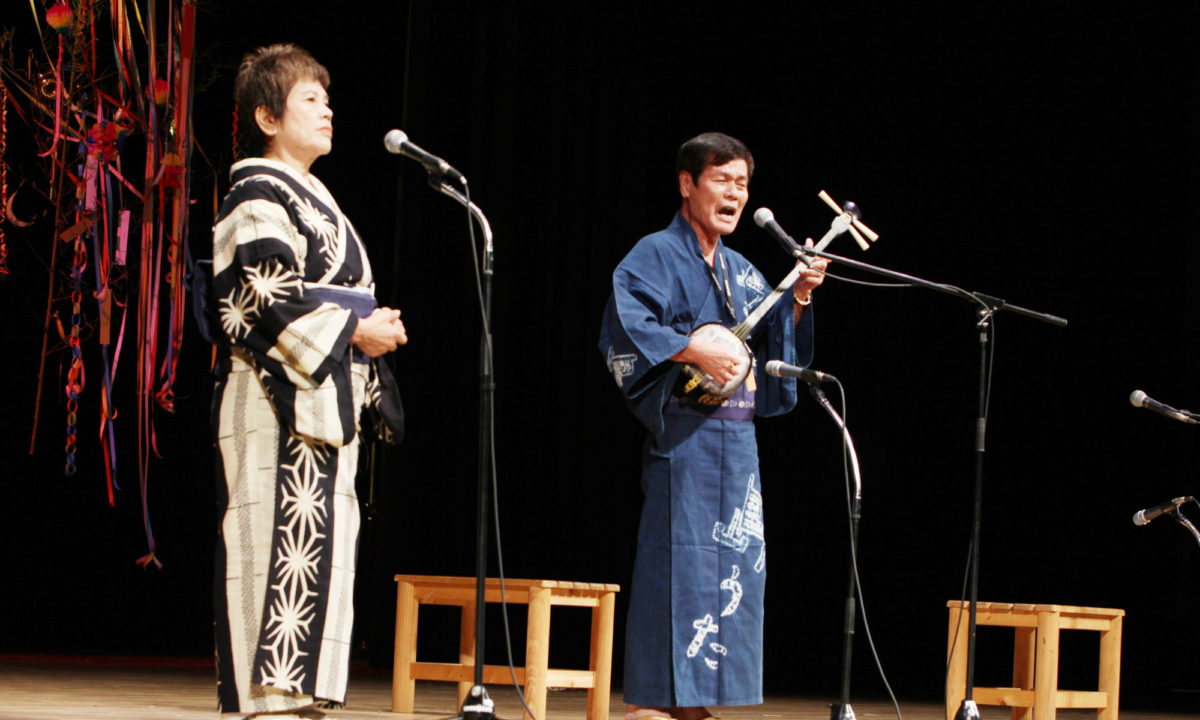 The origins of shima-uta are unclear, though it has similarities to Okinawan music, including the song structure and the use of the sanshin. Some music historians believe Amami’s particular style emerged during the years of colonial domination by the Satsuma domain, when the people of Amami Oshima were forced to work on sugarcane plantations. The songs were used to express their struggles and dreams. As the villages were isolated from one another by the mountainous interior, different styles and songs developed in the various communities. Even today, people can tell, for example, if a song is from the north (a gentler tempo) or from the south (more rhythmical). 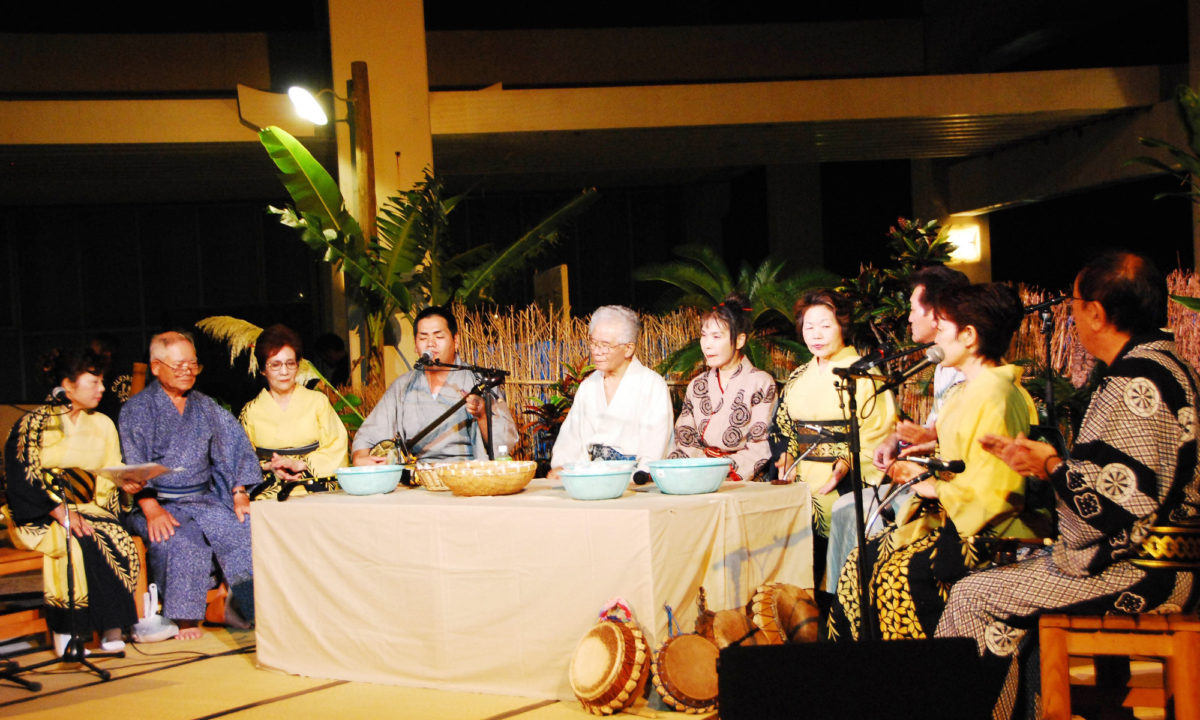 The themes of shima-uta songs are varied. Some are religious in nature, and many are moral lessons for children. Others focus on the pain of manual labor, separation, and longing, and there are humorous topics as well. The songs were traditionally sung around a table by family and friends—a practice called uta ashibi (song play). People would take turns singing the various verses, and improvisation was encouraged and appreciated. While uta ashibi has declined, shima-uta remains an interactive form of musical entertainment for the people of Amami Oshima. 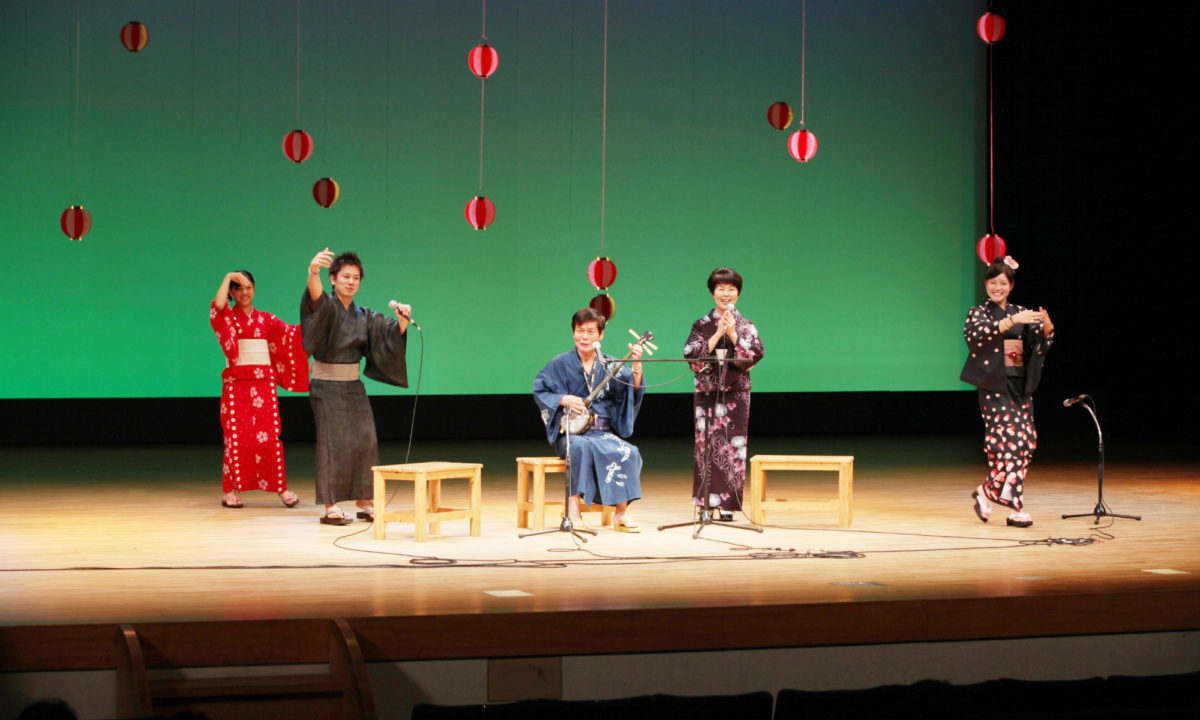 In recent years, interest in local dialects and the music of the island has increased, and a number of local radio stations broadcast a lineup focused on local musicians and shimauta. Visitors interested in the island’s music can catch performances in local restaurants and bars, and at live music events. 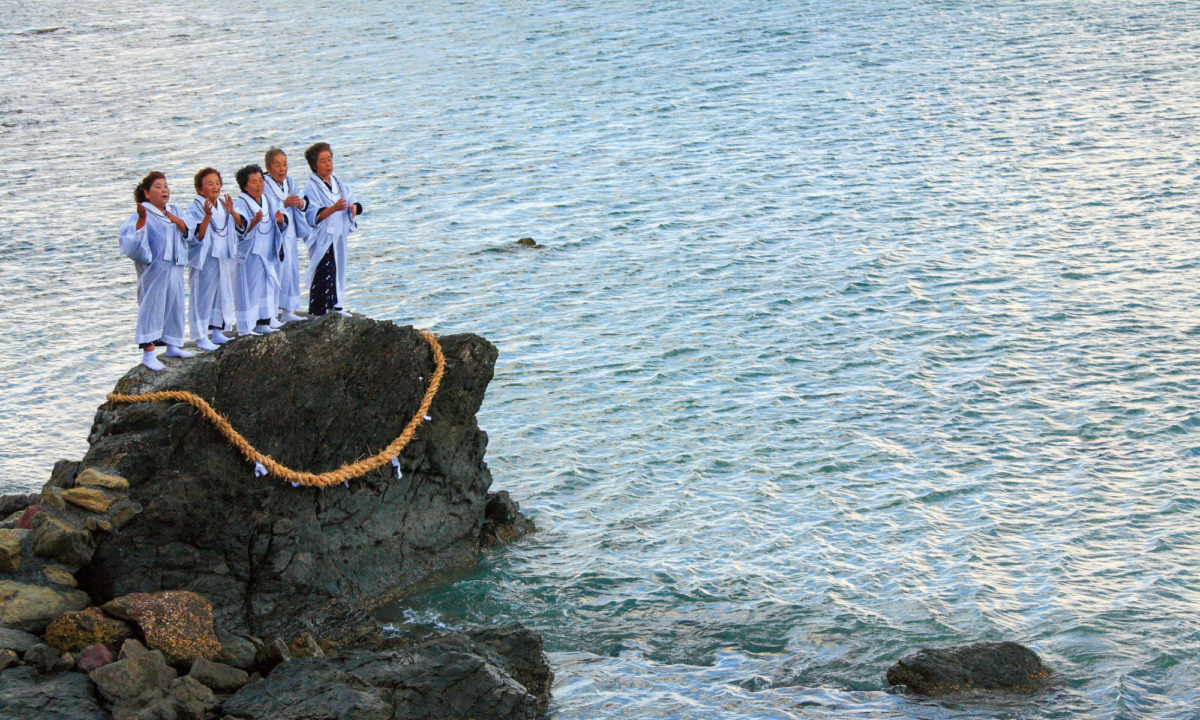 The main events on Amami Oshima are steeped in tradition and lively festivities for all to enjoy.

Yearly festivals are the highlights of social life in the island communities, and are held according to kyureki, the traditional lunar calendar. One of the most representative—and anticipated—events is the Honensai, a festival held annually in late summer or early autumn to celebrate the past year’s harvest and pray for a good harvest in the coming year. The festivities are generally held at the village square, which usually has a dohyo, or sumo ring. A parade of boys and men of all ages makes its way through the village to the myaa, the sacred site where they dedicate their upcoming sumo bouts to the gods of the village. The parade continues on to the dohyo, where the sumo matches are held to the excited cheers of the villagers. All the men in the village are welcome to test their skill and strength. The other ceremonies in the festival, including dance performances, differ from village to village. Historically, the mountainous interior of the island limited communication and interaction between villages, which led each community to develop their own rites and rituals. 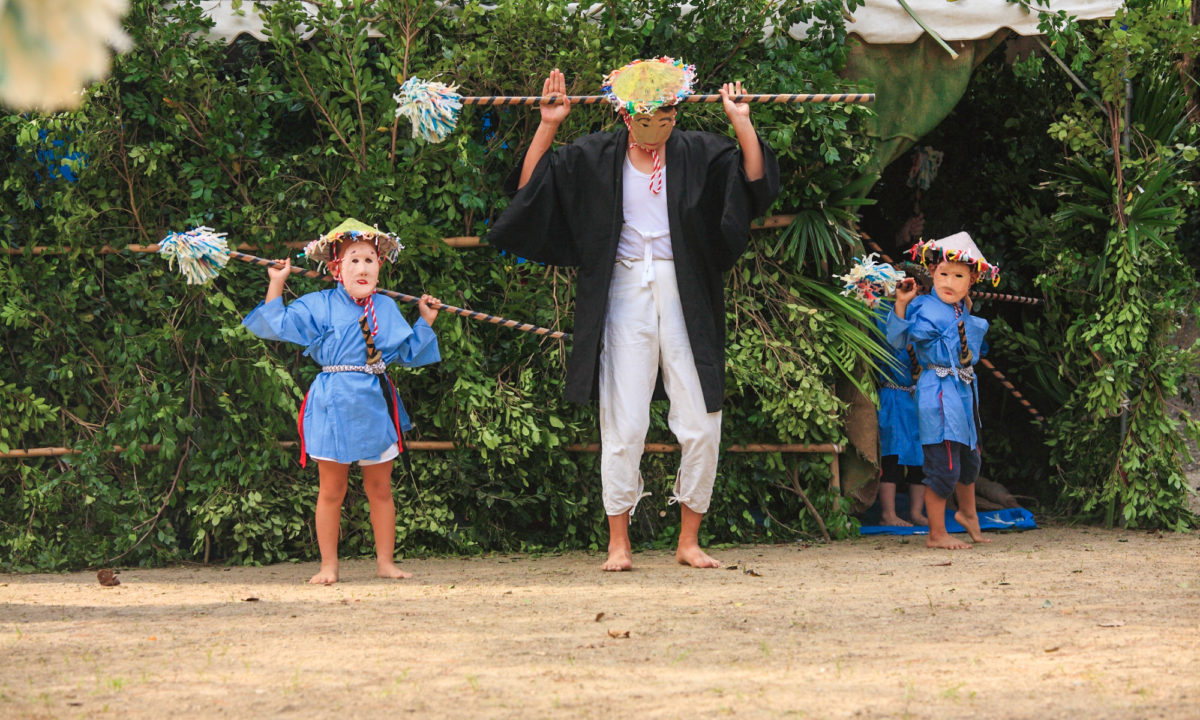 The Honensai often ends with a spirited Hachigatsu Odori, a dance that celebrates the harvest. These dances are held at different times over the summer, depending on the lunar calendar. They are performed by a ring of men and women, and the melody, lyrics, and dance steps are particular to each village. The songs are sung in the local dialect and are accompanied by the small drum called a chijin, along with high-pitched whistling. In the northern villages of Amami Oshima, the tempo increases as the dance goes on, while in the southern villages, the tempo remains the same throughout. At one time, the dancers would wind their way through the community, stopping to dance in gardens and open spaces, but today the event is usually held in the village center, where people bring food and drink to enjoy between dances.

There are other festivals held throughout the year on the island, and interested visitors should check with the tourist center about the event schedule. 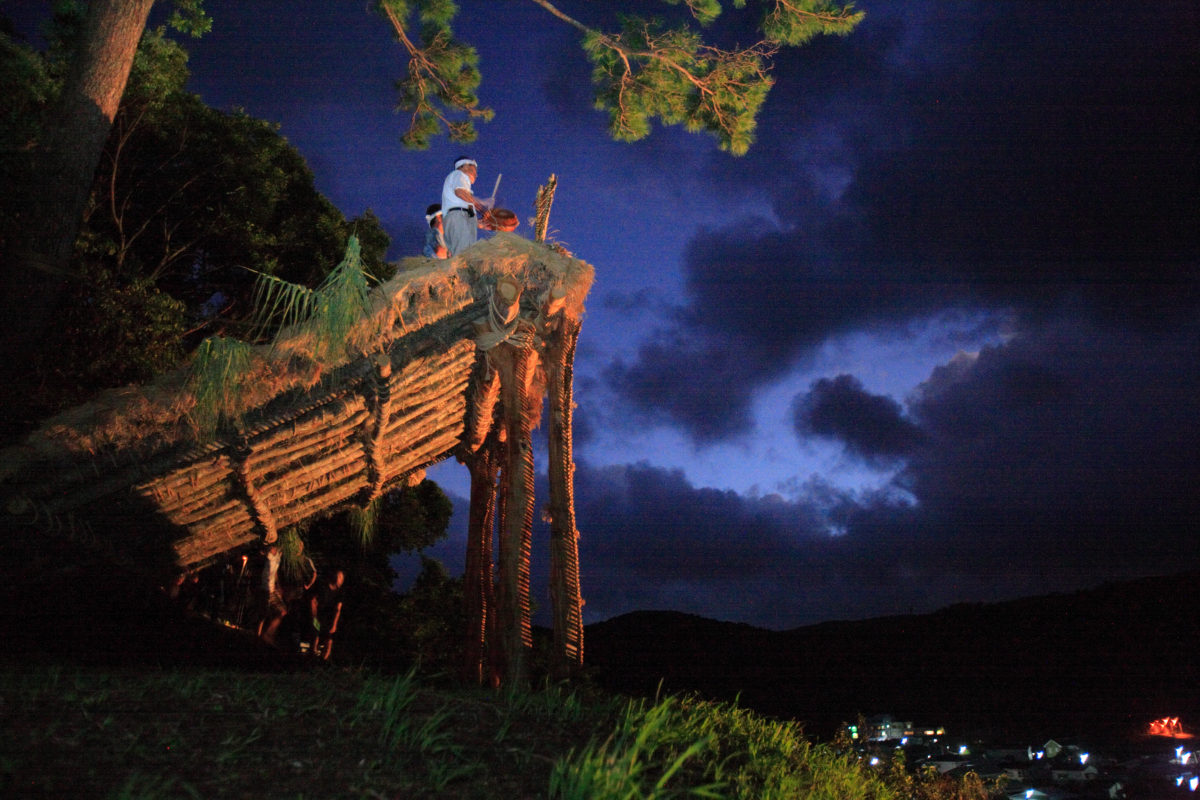 -Held during the 8th month of the lunar calendar
-Takes place in Akina, Tatsugo

Arasetsu is held to mark the seasonal milestone of summer, and is comprised of two main rituals: ‘Shochogama’ and ‘Hirase Mankai.’ These traditional rituals are performed on the day of ‘Arasetsu’ to give thanks for the harvest of that year and to pray for bountiful crops in the following year. In 1985, the Shochogama and Hirase Mankai rituals became officially registered as National Significant Intangible Cultural Property. Viewers gather from all over the world to witness this ethereal event. 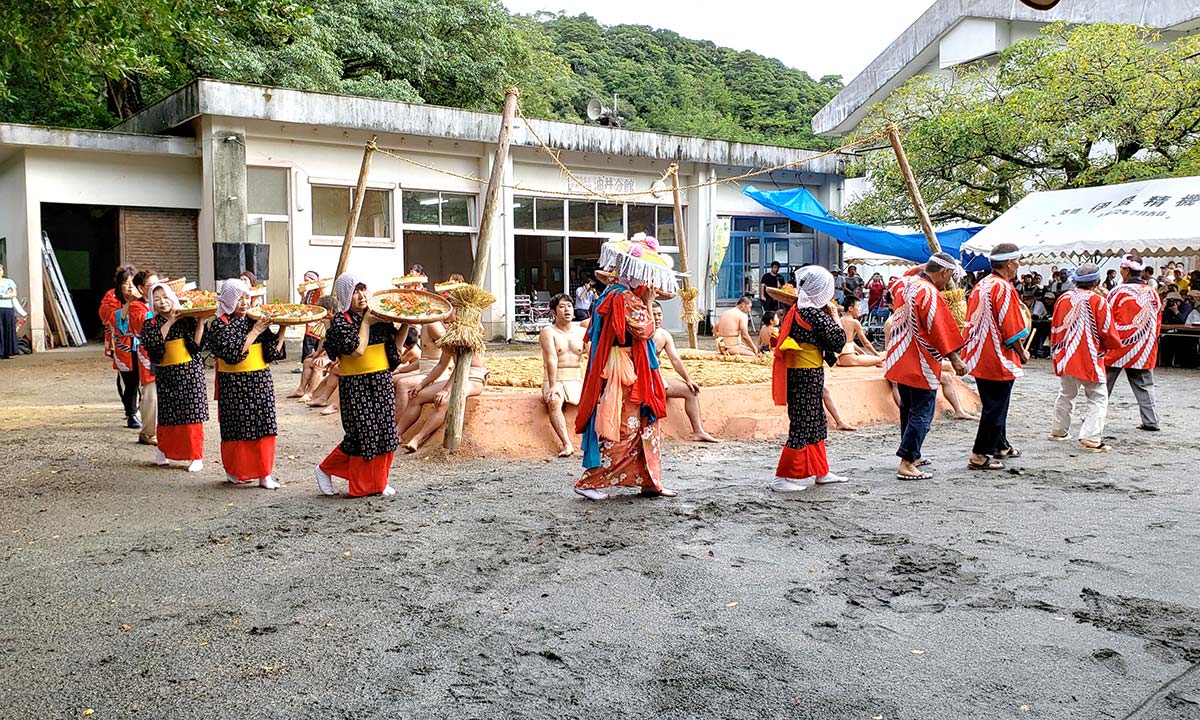 -Held on 15th day of the 8th month of the lunar calendar
-Takes place in Yui, Setouchi

This ‘honensai’ festival features the Yui Honen-odori (harvest dance), which is a 10-part folk dance where the actors don a smiling mask then humorously and colorfully depict the process of rice cultivation to the beat of the traditional shima-uta folk songs of the area. Although the origins of the various aspects of this dance is unclear, it is a valuable Yui cultural tradition, and was designated as Kagoshima Prefecture Intangible Cultural Property in 1983. 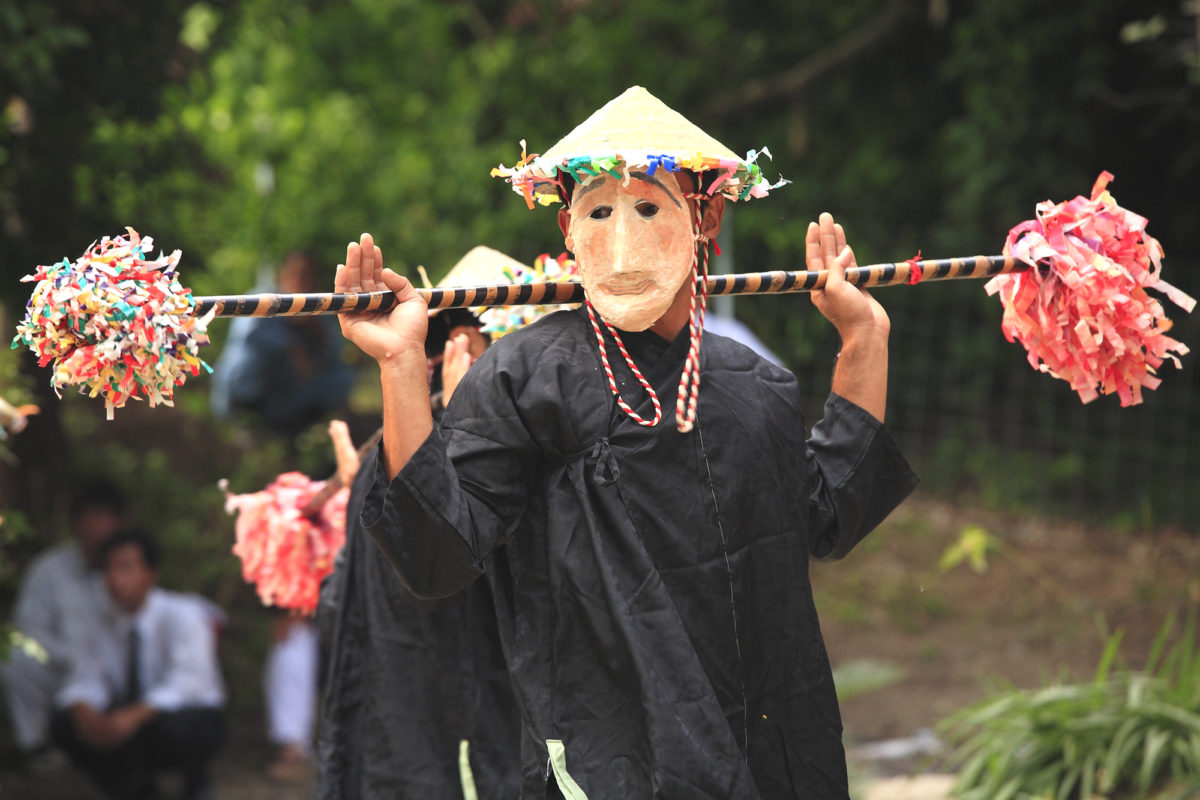 -Held on 9th day of the 9th month of the lunar calendar
-Takes place in Shodon, Kakeromajima

This festival began around 800 years ago as a means for Taira no Sukemori to engage with the locals after he lost in battle and retreated to Kakeromajima. The festival features 11 different kinds of performing arts such as dancing, Kyogen (comedic theater), and puppet shows, and is performed only by male performers, who play even the female roles. It incorporates aspects of both Ryukyu and Yamato culture (modern day Okinawa and the Japanese mainland, respectively). This valuable tradition was designated as National Significant Intangible Cultural Property in 1976.