Mountain Life
Under the Sea 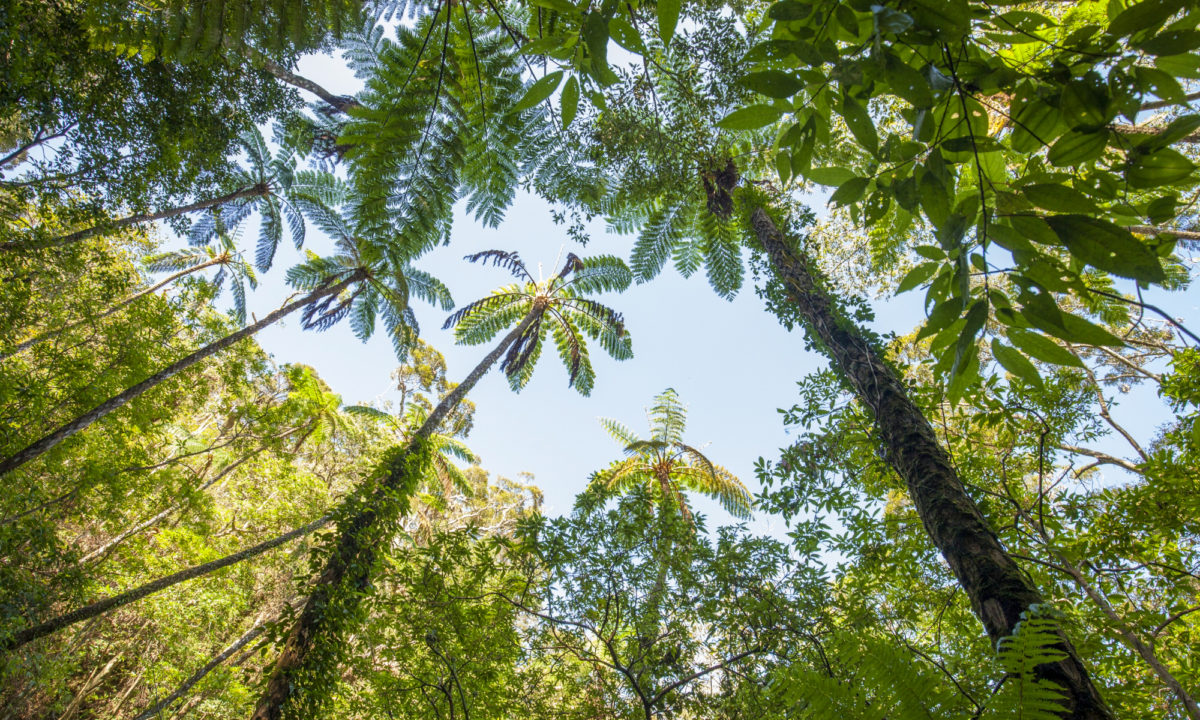 The unique inception of Amami Oshima fostered the deep natural environment that is home to a diverse array of flora and fauna, many of which are endemic species.

Amami Oshima is one of eight inhabited islands in the Amami archipelago, which stretches over 200 kilometers between Kyushu and Okinawa. It is in the subtropical zone, about the same latitude as Nepal, the Sahara Desert, and northern Mexico. The islands were once part of a large land mass that broke off from the Eurasian continent between twelve and two million years ago. This mass later split into separate islands, the largest of which are Okinawa, Amami Oshima, and Tokunoshima. Over the millennia, the Kuroshio, a warm current that makes its way northward from the east coast of the Philippines, encouraged the formation of coral reefs.

Diversity in a Small Area

Amami Oshima is divided into five administrative units of cities, towns, and villages. Amami City is the largest community, with a population of over 40,000. The island has an airport with direct flights to Japan’s major cities and frequent ferry services to neighboring islands. Around 70 percent of Amami Oshima’s 712 square kilometers are mountainous, with densely forested slopes rising sharply from the shoreline. Mt. Yuwan is the island’s highest peak, at 694 meters. Arable land is mostly found on the flatter, northern part of the island. The island also contains Japan’s largest evergreen broadleaf forest and second-largest mangrove forest. 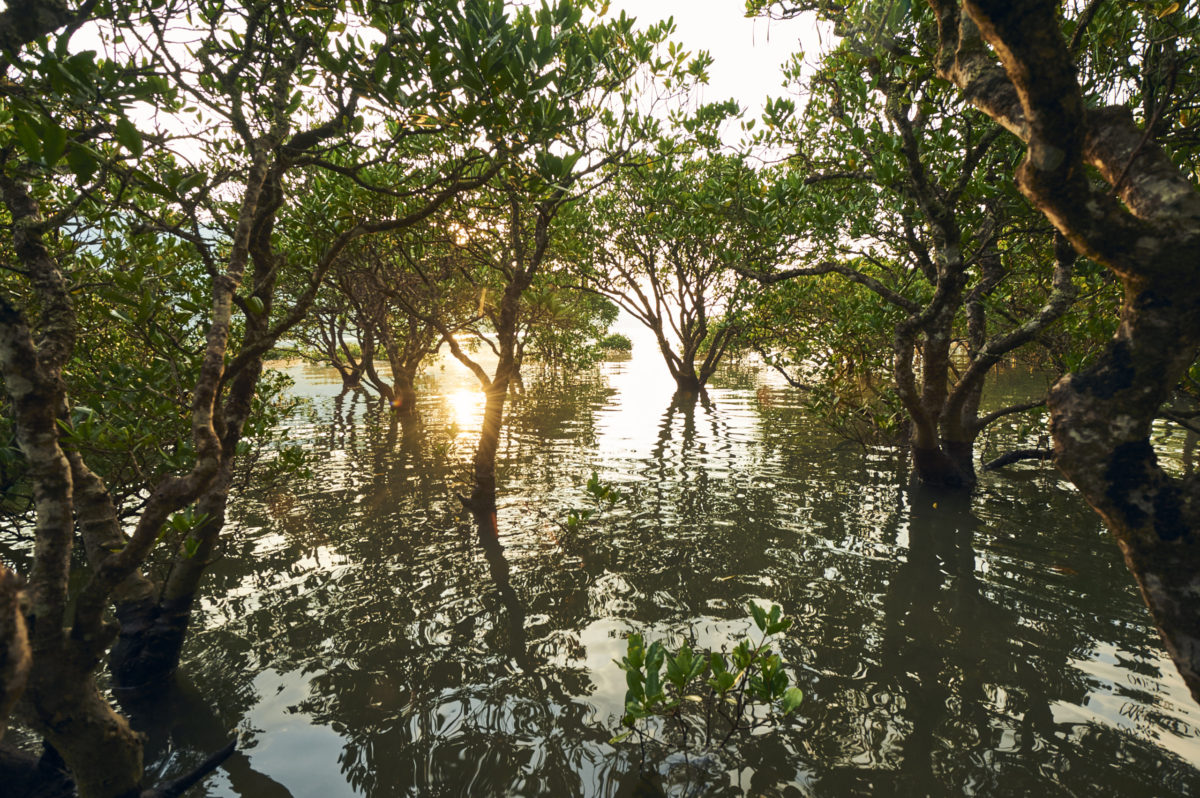 An Island of Communities

Villages on the island are called shuraku (communities) or shima (“island” in Japanese, though Amami Oshima residents use the term to refer to their specific community). Almost all are located along the coast, at the mouth of rivers. Until modern times, the communities were not connected by transport links through the interior, and relied solely on boats for commerce and travel. Today, all the communities are accessible by road thanks to a number of tunnel construction projects. 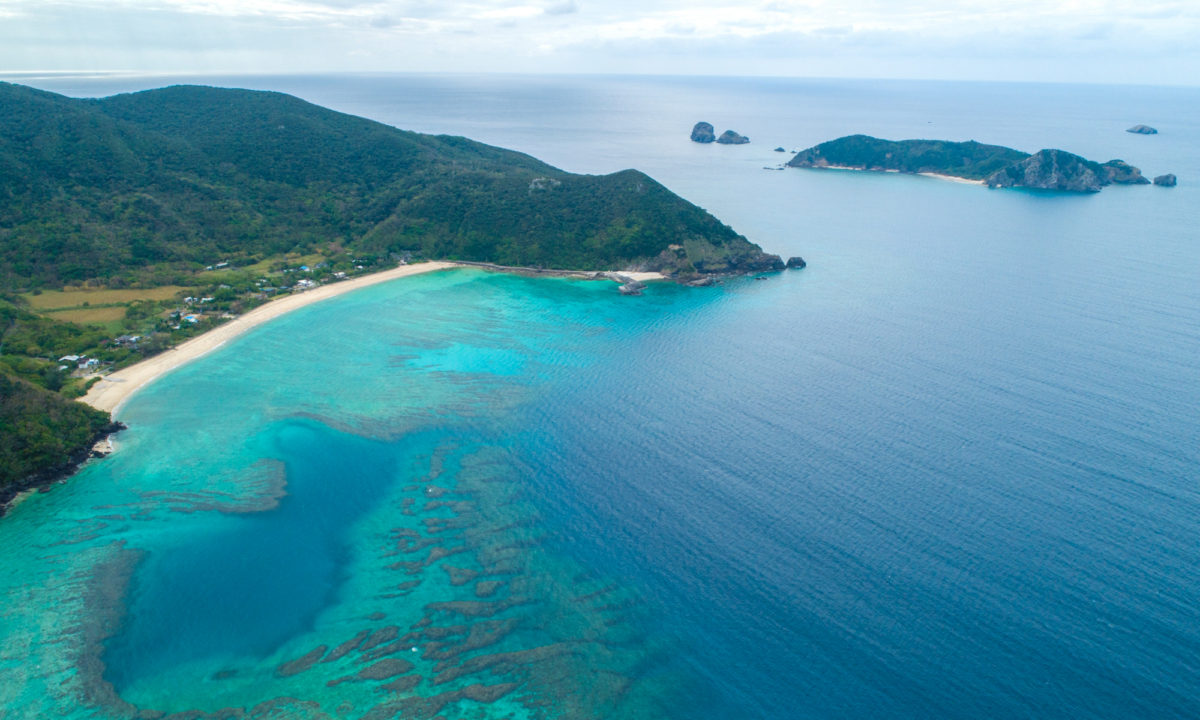 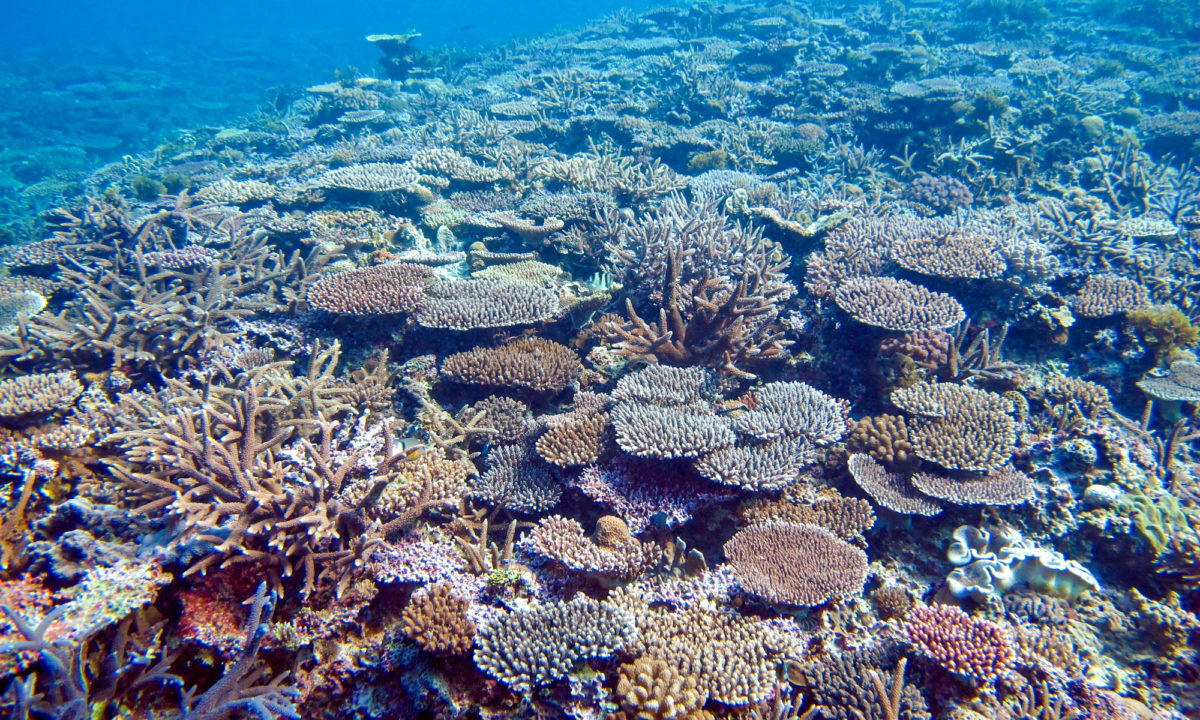 Due to the subtropical climate, Amami Oshima boasts incredible biodiversity which is exhibited by the sea life and coral reefs in the surrounding ocean.

The coral reefs of Amami Oshima are sustained by the warm waters of the Kuroshio Current, which runs along the Amami Archipelago, and by extension the Ryukyu Islands. Coral larvae are transported along this ocean current, keeping the coral of Amami healthy. 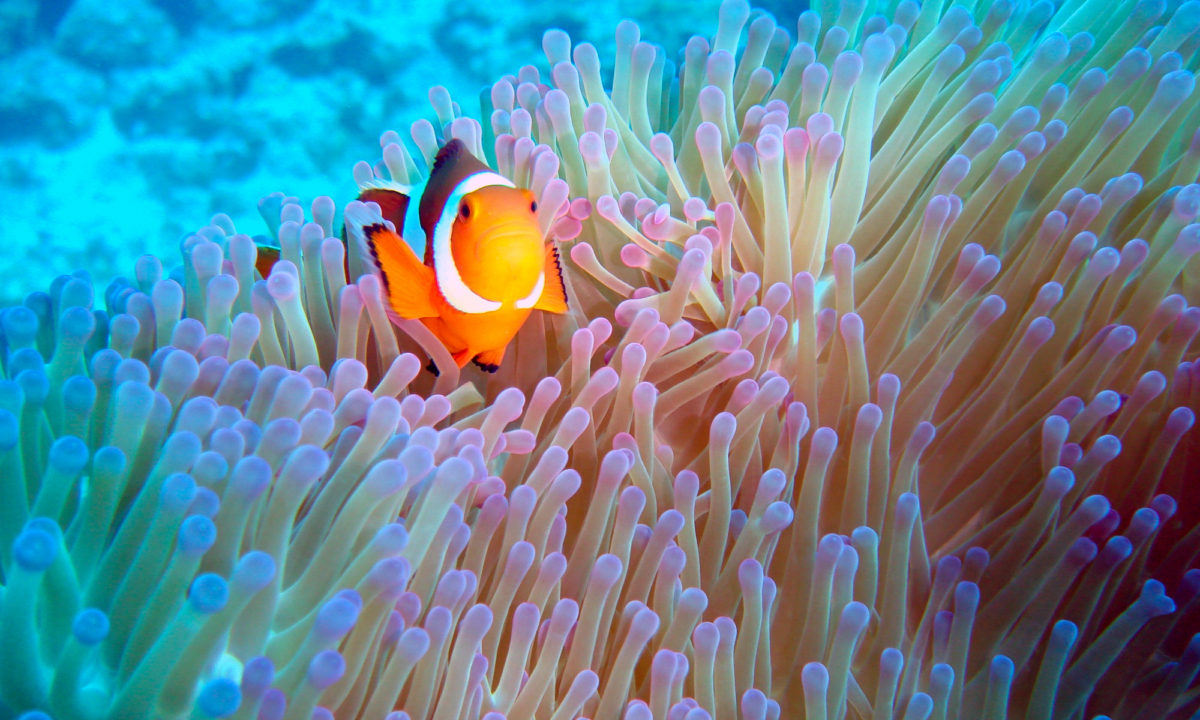 In turn, the ocean is full of sea creatures and ocean life that is fascinating to experience first-hand. The water of Amami is exceptionally clear, ensuring that visibility is rarely an issue for marine activities such as scuba diving (the average visibility is over 20m!) Many coral reefs and other areas are relatively shallow, so first-time divers can take part in diving tours without going too deep. Sea turtles laying amongst table coral, vibrant sea slugs, schools of tropical fish, pygmy seahorses blending into the ocean scenery; these are only some of the underwater experiences that are common in Amami Oshima. 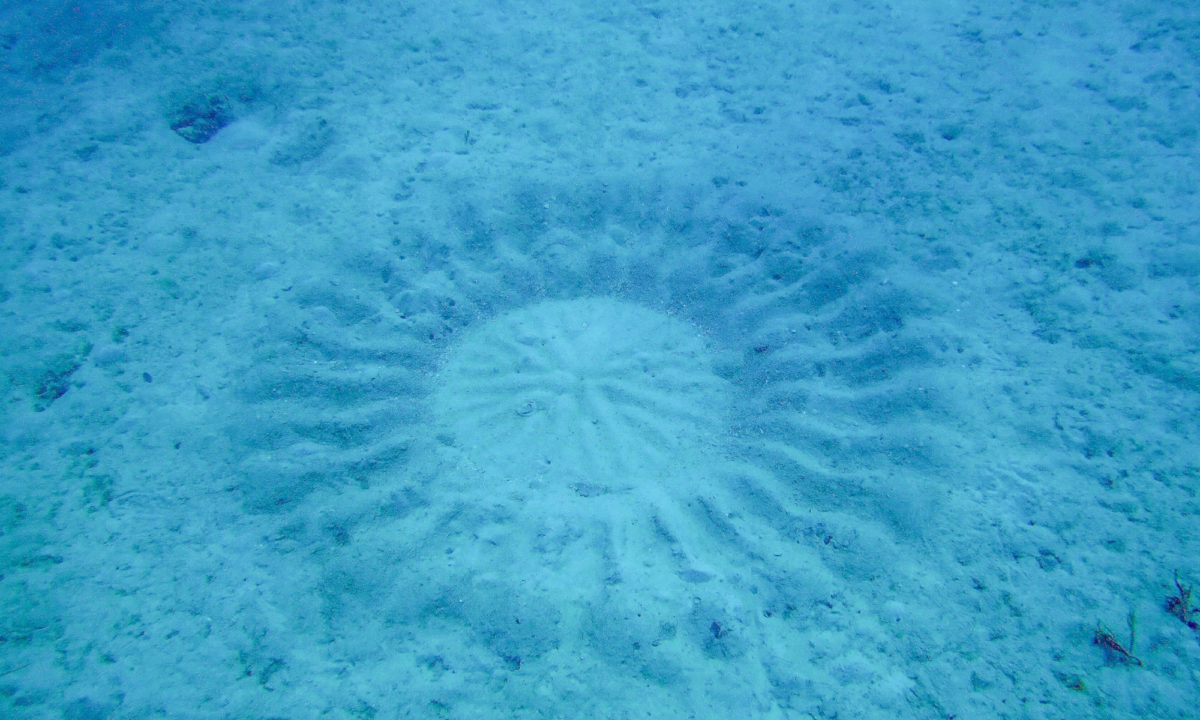 Another very special scene can be found on the ocean floors of Amami—this is known as the ‘mystery circle,’ because it was found before the species that makes it was even discovered. Can you guess what it is?

This is actually made by male white-spotted pufferfish (Torquigener albomaculosus) to attract mates! This species was discovered in 2014, and has only been found in the waters surrounding Amami Oshima.
The ocean temperatures range from an average of 19℃ in January as the coldest, to an average of 29℃ from July to September being the warmest. The sea life and ideal spots for swimming change by the season, and other factors such as visibility alter as well. 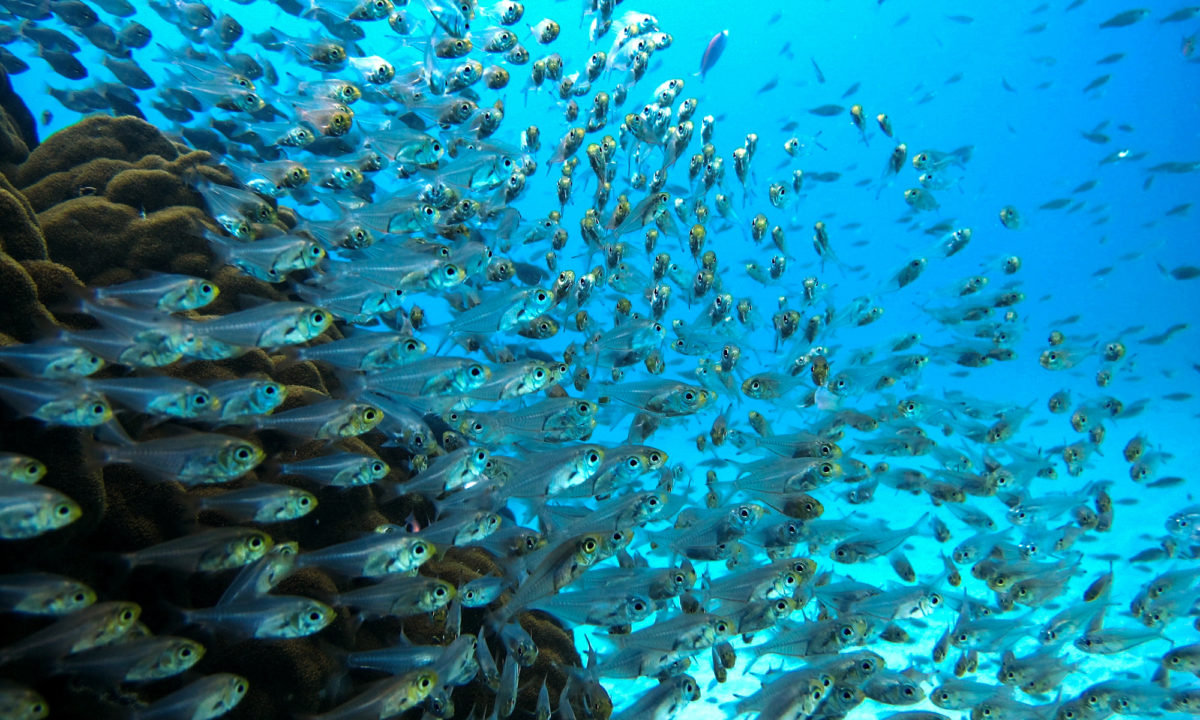 Amami Oshima offers a variety of marine sports and other activities to fit the season and accommodate the needs of visitors. Try out snorkeling, scuba diving, fishing, sea kayaking, whale-watching, surfing, and more!

As amazing as the ocean is, it is not to be taken lightly. Some areas have powerful rip tides that can easily sweep even the best swimmers out to sea, so it is imperative that cautionary measures are taken when swimming in the ocean. Swimming alone is highly discouraged, and there are some dangerous sea creatures such as sea snakes to be careful of. Rash guards, water shoes, gloves for use while diving, etc. are some items that should be brought on a beach excursion.

Call the emergency number 119 or go to the nearest hospital in case of an emergency.